This route, the last stretch of GR 131, is one of the most frequented and iconic excursions on the island of La Palma. La Ruta de Los Volcanes is a compendium of historical volcanic activity on our island, through a landscape of lava, ash, craters and volcanic eruptions, crossing the younger part of the island, which give its name to the Natural Park of Cumbre Vieja.

This route at night, under the bright mantle of the Moon, has become one of the most traditional night hikes of the trails of our island. The colours and shapes become magical, changing our senses and emotions. This landscape reminds us of many images of the lunar surface. Sometimes you can hear nocturnal animals, like the small owl, cricket or tailed bat (the largest bat of the Canary Islands which emits metallic “clicks” audible to humans). An interesting activity is to recognize the brightest constellations in the sky, after sunset and before sunrise, which surprised us by moving across the sky due to the rotation of the Earth.

This tour covers a small section of the GR-131 “The Walking Stick” and LP PR 11/12, passing through the peaks of the island, bordering on the National Park Caldera. During the tour we can see numerous natural erosion walls, dykes, the most iconic of which is “Roberto’s Wall”.

Near this volcanic dyke we can find numerous ancient inscriptions (petroglyphs), the work of the first inhabitants of the island, the Awara. The site contains over 20 engravings, the most outstanding of which is a group of 4 small symbols in the form of U on the same rock. According to some research, it may be related to the worship of Canopus, since its arrangement lines up with the place where the star sets.

The Isaac Newton and Jacobus Kapteyn Telescopes, near the trail, welcome us to the observatory. After passing the Swedish Solar Tower and the DOT, in the next dip, on the right, you can find a restored shepherd’s shelter. After reaching the highest point of the island, El Roque de Los Muchachos (2,426 m.), we go down the path PR LP 11/12 towards the heliports. We can find several more restored shepherd’s huts close the trail, as well as passing close to professional telescopes like the Gran Telescopio Canarias – GTC, the largest optical telescope in the world with a main mirror 10.4 m. across.

After the heliports, the trail leads to the archaeological site of Las Lajitas, protected by fences, inside which can be found 18 stone cairns of different sizes with nearly a hundred engravings. This was possibly an ancient astronomical marker (lunar and solar). 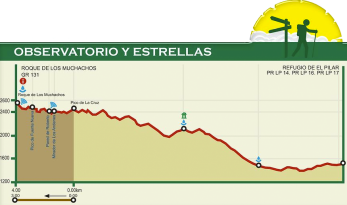 The Route of Sun and Salt

This route, a section of the GR 131, runs from the San Antonio volcano (Los Canarios) to the vicinity of the Fuencaliente lighthouse and the salt pans.

On the flat ground beside the visitor centre for the San Antonio volcano, there is a newlyinstalled astronomical viewpoint which marks the solstices and equinoxes. On these dates, the shadow of one of the stelae (standing stones) points directly to the central stone.

During the excursion we take a detour to Roque Teneguía. This site contains a splendid collection of petroglyphs, composed of more than 70 panels and 150 inscriptions: meanders, circles and spirals among others. Due to its colour differentiation (lighter colour), orientation and arrangement of the rocks, some researchers believe that the place could have been an archetype (model) of the heavens to the ancient inhabitants of the island. The starring cosmic role is taken by the Winter Solstice, since most of the panels look towards it. Other designs mark the place where the sun sets during the summer solstice, the point of sunrise at the equinoxes and the exact point where the star Canopus rises and sets.

We rejoin the main trail running beside the Teneguía volcano, until we reach the salt pans (Salinas de Fuencaliente).

The path must end with a visit to the Salinas de Fuencaliente and its surroundings, where panels explain how the action of the Sun makes salt.

The Route of the Stars

Numerous groups of hikers begin this journey from the slopes of Pico de La Cruz or from the intersection of El Pico de La Nieve, to complete the route of the “walking stick” GR 131 heading south, with the intention of staying in the shelter Punta de Los Roques.

The route provides spectacular views, and after passing the Pico de La Nieve, we find a place which was sacred for the Awara, the ancient inhabitants of La Palma, located at the base of Pico de La Sabina. It is a complex of rock carvings in more than 200 motifs, located in two dykes and rocks nearby, which according to some research indicate the point where the sun sets on the Winter Solstice. Although the carvings use the typical shape of Awara symbols (meanders, circuliformes or spirals), the motifs are simpler than usual.

After passing Lomo Corralejo and Degollada del Río you reach the hostel at Punta de Los Roques. This is a great place to enjoy the night, dark and free of light pollution, that conveys a sense of closeness between the heavens and the Earth. On one side we have the Caldera and on the other, Aridane Valley. The many colour of the dawn invite us to follow the path with spectacular views to the south of the island.

The hostel has just 20 bunks. Since it is public, it is advisable to inform the manager of the shelter, the National Park of La Caldera, in case other groups of walkers arrive on the same night. From there the trail descends towards the peaks of Corralejo and Las Ovejas, up to the Pista de la Hilera.

From here there are several options, the path PR LP1, heading east or west, or follow signs to Refugio El Pilar (GR 131).

Prepare for your hike along these trails by visiting the web

The Roque de los Muchachos Observatory is open to visitors.

Take this chance and enjoy the stars from one of the most privileged sites on the planet for astronomic observations.